MBARI is celebrating the 150th, or sesquicentennial (say that five times fast), deployment of its first long-range autonomous underwater vehicle (LRAUV), Tethys. This milestone was achieved during an ongoing field experiment in Lake Erie, where the vehicle is being used to survey the waters for a harmful alga that produces a liver toxin known as microcystin.

MBARI engineers began developing the new, small AUV in 2007. Since then Tethys and its siblings have allowed scientists and engineers to track marine biological processes on a longer time scale than other AUVs. LRAUVs make use of a variety of operating modes that allow the vehicle to switch between low power and high-power consumption, based on sampling needs.

Tethys was the first of a whole fleet of energy-efficient LRAUVs built at MBARI. Before Tethys, MBARI relied on a group of larger vehicles known as Dorado-class AUVs, which required a large ship, a large crane, and many hours of ship time for each mission. MBARI still relies on these larger AUVs for seafloor mapping, imaging, and midwater sampling. 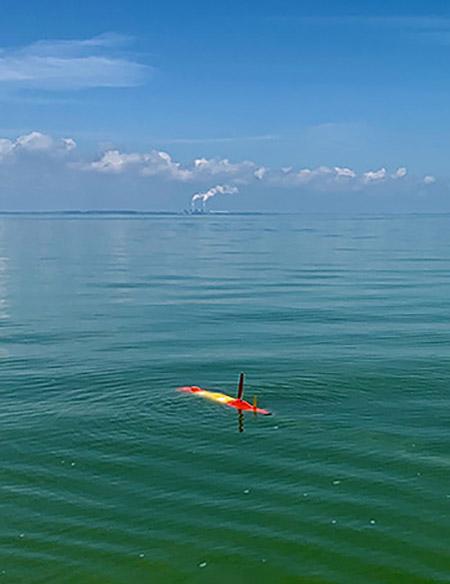 In contrast, MBARI engineers and marine operations staff can quickly and efficiently launch and recover an LRAUV using a small research vessel, Paragon, which is just 9.7-meters (32-feet) long.

With a maximum range of over 1,000 kilometers (620 miles), LRAUVs are able to travel much farther than the traditional AUVs. They also have a “sit and wait” mode that lets them stay at sea for long periods of time. For example, an LRAUV might remain dormant until a patch of algae drifts by, causing the vehicle to switch out of its low-power configuration to begin sampling the bloom.