A nutrition expert has revealed the rules to weight loss from around the world -including eating seven pieces of fruit and veg and fish three-times-a-day.

George Hamlyn-Williams, based in Nottingham, is the principal dietitian from The Hospital Group and following research that puts the UK’s obesity rate ten times higher than countries such as China, he turned to several countries’ nutritional guidelines to see what they were doing differently.

He revealed exclusively to Femail his findings and ten of his dos and don’ts when it comes to weight loss and nutrition from around the world. 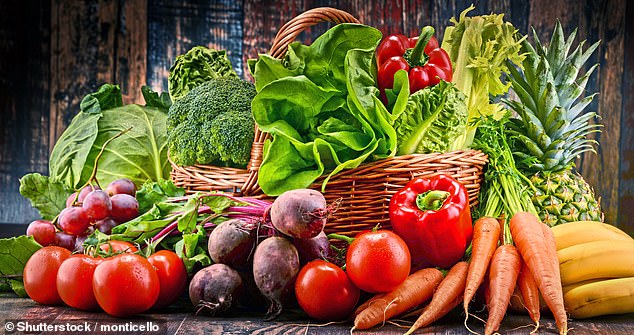 George Hamlyn-Williams is the principal dietitian from The Hospital Group talked us throgh the dos and don’ts of nutriational advice around the world. China recommends a daily intake of seven fruit and vegetable instead of the West’ recommendation of five a day. Pictured: an assortment of vegetables (stock image)

DO – Have seven portions of fruit or vegetables a day (China)

‘China recommends having at least seven portions of fruit and vegetables a day. It’s no secret that fruit and veg are packed full of the good stuff, including vitamins and minerals and folic acid,’ George said.

‘Folic acid can help reduce blood levels of homocysteine, a substance that research suggests can be a risk factor for coronary heart disease,’ he added.

‘A combination of seven different types of fruit and vegetables is more than the global average recommendation, with Australia and the UK recommending five portions.