Experts say about 700 sites had been identified globally with low oxygen levels, up from only 45 in the 1960s.

The loss of oxygen from the ocean due to climate change and nutrient pollution risks “dire effects” on sea life, fisheries and coastal communities, a global conservation body has warned

The International Union for the Conservation of Nature (IUCN) said on Saturday that about 700 sites had been identified globally with low oxygen levels – up from only 45 in the 1960s.

In the same period, the group warned in the largest peer-reviewed study to date that the volume of anoxic waters – areas totally devoid of oxygen – have quadrupled.

“What we are seeing is a decline of 2 percent in the global oxygen level [in the oceans]. It doesn’t sound like a lot but this small change will have enormous ramifications,” Minna Epps, the IUCN’s global marine and polar programme director, told Al Jazeera.

“Deoxygenation will have an impact on biodiversity, on biomass of commercially important species and on vulnerable rare species. It will also have an impact on habitats. We are seeing species migrating because of this,” she added.

The report found that the loss of oxygen is increasingly threatening fish species such as tuna, marlin and sharks, all particularly sensitive to low levels of the life-giving gas due to their large size and energy demands.

“To curb ocean oxygen loss alongside the other disastrous impacts of climate change, world leaders must commit to immediate and substantial emission cuts.” 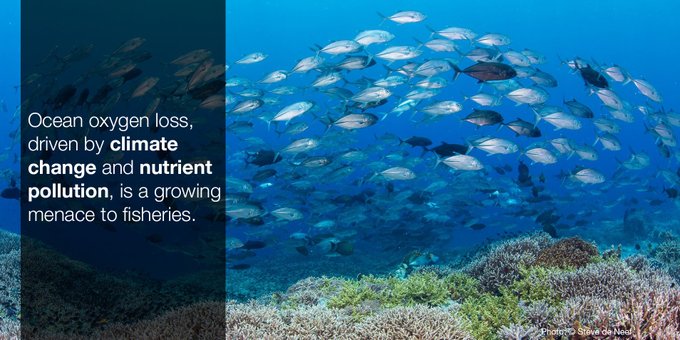 The ocean absorbs about a quarter of all fossil fuel emissions, but as global energy demand continues to grow there are fears that the world’s seas will eventually reach saturation point.

On current trends, oceans are expected to lose 3-4 percent of their oxygen globally by 2100.

However, most of that loss is predicted to be in the upper 1,000 metres (3,281 feet) – the richest part of the ocean for biodiversity.

“With this report, the scale of damage climate change is wreaking upon the ocean comes into stark focus,” Grethel Aguilar, the IUCN’s acting director, said.